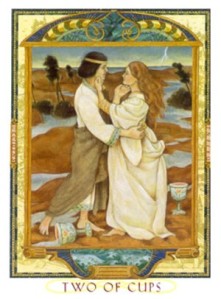 Another astrologer sent me these two charts to get a second opinion on her relationship with another Cancer Sun. Interestingly these two both have their Suns at 16° Cancer, even though they were born several years apart. She did not have an exact birth time for him but believes he has Scorpio Rising and most likely has Moon in Aries conjunct Mars. I’m guessing they are both pretty powerful individuals in their own right because she has her Moon (Cancer’s ruler) in the first house conjunct Pluto and he his Scorpio/Aries influences.

What really jumped out at me looking at their synastry were three sets of intra-aspects (same planets from both charts in aspect) involving Saturn, suggesting this relationship will have legs. They have Sun/Saturn, Mars/Saturn and Venus/Saturn intra-aspects between their charts. His Saturn also squares her Moon/Pluto conjunction too. He is a fair amount older, often a factor where Saturn plays a major role in synastry.

Jupiter is in Libra in both charts conjuncting his North Node. Since he has a T-square with his Sun at the apex with Jupiter and Mars in opposition, this means her Sun is also squared by his Mars/Jupiter. I beginning to believe there is a mix of passion, generosity and a certain over-the-top quality to their interactions, not to mention drama?! With a Sun square Jupiter intra-aspect combining the warmth of the Sun with Jupiter’s ability to amplify they probably know how to have a good time or love a good debate. I believe Stephen Arroyo would call this Sun/Jupiter combo “over stimulating” . . . ::grin::

With her Moon/Pluto conjunction in Virgo inconjunct his possible Moon/Mars in Aries conjunction, sharing living quarters could get interesting especially for two Cancer Suns. Meticulous earthy Virgo does not have a lot in common with fiery Aries and if his Mars is indeed conjunct his Moon, patience will not likely be his long suit. In fact, this is one relationship where separate dwellings may save the day. Another synastry aspect adding a measure of challenge to their day-to-day relationship is a close square between their Mar’s. Having Mars square by sign (and in this case, by degree) says they have very different styles of taking action and will most likely find attempting to work on joint projects very irritating. On the other hand, her Venus in Leo is pleasantly sextile to his Venus in Gemini, an indication they have similar ideas of enjoyment.

As I was not given much information about the nature of their relationship, it’s difficult to speculate further but since we are talking Cardinal signs here with lots of Saturn in their synastry, they may find the challenges inherent in this relationship add interest. A real plus in their synastry is her Mercury conjunct his Sun providing a vital communication link between them. It has always surprised me to how often Cancer Sun people end up in lasting relationships with very challenging synastry aspects.

This is the Two of Cups from the Lover’s Path tarot deck. For two water signs I felt the suit of Cups appropriate and having one cup full and the other spilled for what the astrology indicates is a rather tumultuous relationship! 🙂