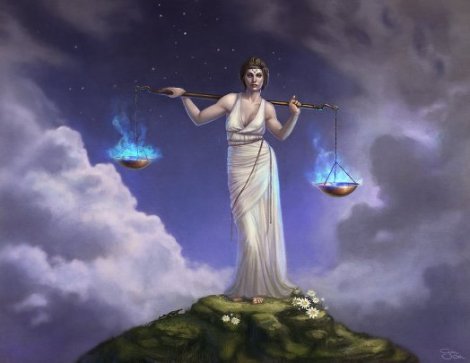 Before anyone starts getting too worried about the whole Mars in Libra Retrograde thing, let’s step back and take a closer look at it. First of all, Mars has been in Libra a couple of times since the Uranus-Pluto square has been in effect and been part of a T-Square with those two planets each time. Mars conjoined Saturn in Libra on 31 July 2010 exactly opposing Uranus in Aries and square Pluto in Cappy at 0°. It repeated this aspect on 17 July 2012 with the Moon in Cancer creating a transitory Grand Cross at 7°. In fact, the main difference this time around is the length of time Mars will spend in Libra thus aspecting the Uranus-Pluto square several times. Plus when Jupiter in Cancer is the fourth planet in the Grand Cross, it will be in place longer and be noisier . . . Jupiter is not a quiet, reserved planet after all. The Grand Cross next April will be at 13°. Mars will station retrograde at 27° on 1 March and direct at 9° on 19 May, important because Mars will pause at those degrees for about two and half weeks.

What does this mean to us little people? The most important factor is whether or not we have personal planets, Ascendant or Midheaven in the cardinal signs (Aries, Cancer, Libra and Capricorn) from 8° to 15° with 13° being the most critical. Mars in Libra will conjoin, oppose or square those placements in a noticeable way because those are the degree points when Mars will be aspecting Jupiter, Uranus and Pluto.

Mars transiting the first house whether it aspects natal planets or not is also noticeable. This is true to a lesser degree of the other angular houses (fourth, seventh and tenth). Otherwise unless Mars aspects a natal personal planet as it transits your chart, it won’t be much different than any other time Mars is in Libra.

Mars brings energy and life as it transits around our charts, sometimes too much to deal with easily. When it conjoins the Sun we are revitalized but it makes the Moon supersensitive. Mercury transited by Mars talks too much, Venus may fall in love with love and Mars to Mars makes us want to go, go, go.

As I mentioned in my earlier post, Mars is not at its best in Libra. If pressed too hard to take action, it will often freeze up and refuse to move though this tendency can be moderated by aspects to other natal planets. For example, those with Mars conjunct Uranus in Libra usually have no problem make snappy, abrupt moves. Still Mars in Libra is happiest when not feeling pressured or rushed. Those times when Mars aspects the cardinal outer planets will make him more irritable than usual and if it connects to our charts, we may feel cranky and snappish too.

Yes, there is a positive aspect to all of this Mars activity. It may provide the final irritant some of us need to get out of a bad situation of some kind. Maybe a dead end job we have been afraid to leave, an unhappy relationship or living situation we need to be booted out of, and perhaps the energy to get off the couch and out the door to exercise. Take a look at your life and the sector of your chart Mars in Libra will be crossing for possibilities that need addressing. Obviously the sky didn’t fall or the world come to an end when Mars in Libra jousted with Uranus and Pluto before, did it? We can do this!

16 responses to “Observations: Mars in Libra – Up Close & Personal”